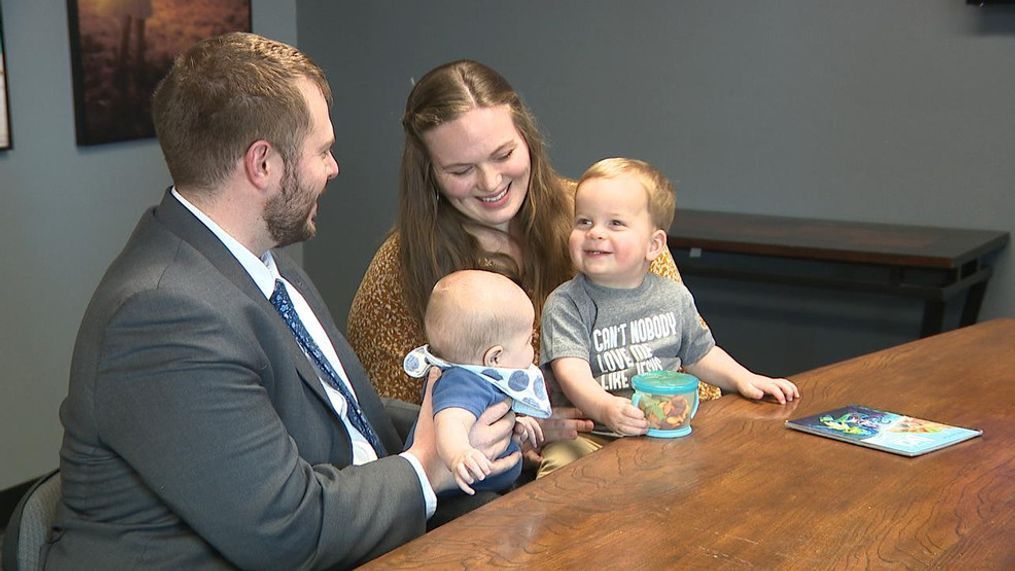 ABILENE, Texas — While RSV numbers have trended downward both locally and nationwide, it was rampant just a few weeks ago - the Watson family knows that all too well.

The Watsons already had their hands full with two kids under the age of two. Their older son, Topher, got sick with RSV right before Thanksgiving. While he did need to be hospitalized, he bounced back relatively quickly - but that wasn't the case for his younger brother Everett, who got sick with it shortly after.

"Wednesday he was fine, Thursday he was admitted, and then Saturday morning - he was intubated," said their mom, Kelsey Watson.

"Dr. Barham listens to him, advises that 'Yup, we need to find a children's hospital ICU,'" said their dad, Cole Watson. "I think at that point we were like, yeah he's sick, but what do you mean ICU? And then we could see his labor, the oxygen levels, the respiratory rate, and we sort of recognized that his little body was about to give out. His little body doesn't have the strength."

Everett, only two months old, was transferred to a hospital in San Antonio and intubated for 13 days, covered in tubes and wires.

"It's hard watching your kid suffer and knowing you can't hold them and comfort them," said Kelsey.

Although it was a scary experience, the Watsons say they still felt peace, because of their community.

"It felt like there was this hedge of protection," said Cole. "With as much as could have gone wrong and as much as we could feel despair or stress or anxiety, , being in the hospital, living in the Ronald McDonald House even, it just opened up our eyes to our community here, our church praying over us, pouring into us, our families doing the exact same, the hospital staff."

Behind all that, they had their faith.

"We always had a sense of optimism that were going to get out of here, that this is going to pass," said Cole. "But even in the midst of that trial, we still had to recognize that God was good and God was at work. Even when we got this scary new medical vocabulary tossed around, we still recognized that this was for God's glory, for God's goodness."

The pair of baby brothers spent almost a month apart through all this.

"Even Topher being as young as he is, I think it made us all much more grateful to be together," said Kelsey.

While they missed their first Thanksgiving together, Topher and Everett were back by each others side for Christmas.

"When he got home, he was trying to climb in the car seat with him, saying 'Bubba! Bubba!'" said Kelsey. "And he'll still now be playing and he'll just run over and give him a kiss and then go back to playing."