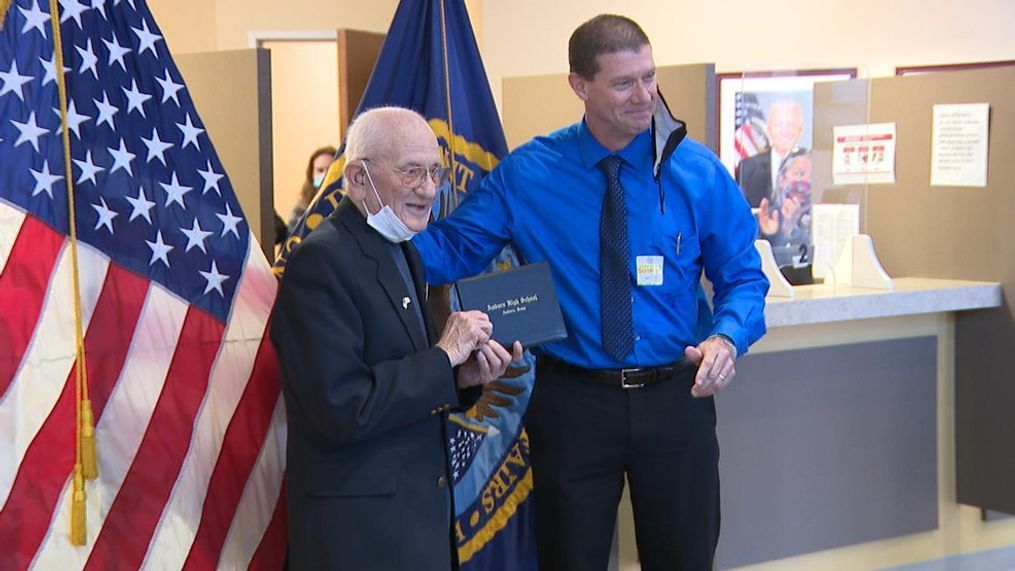 98-year-old Donald Huisenga was part of the class of 1943 but was unable to graduate due to being drafted into the war.

"I never graduated from high school," said Huisenga. "I was taken in the service in 1943."

He was parachuted into Normandy fighting day and night for our country before getting wounded.

"I got blown back 30 feet and was picked up by two polish boys," said Huisenga. "They picked me up and all I had on me was a shredded shirt and shorts."

While recovering at the hospital, he was captured and became a prisoner of war.

"I weighed 175 lbs when I went in the war," said Huisenga. "We didn't have anything to eat, so if you stayed, you starved to death."

Huisenga told KTXS he was eventually freed and made it back to the United States.

In their later years, he and his wife called Texas home.

The WWII vet has overcome so much, including a battle with COVID-19.

Kevin Litterer, the principal of East Sac County (ESC) School District, was contacted by a social worker in San Angelo that helps Huisenga to see if he could help achieve his goal of graduating high school.

Auburn High School is no longer in operation and is now part of the ESC District.

"I was first contacted by Tess about Huisenga and that his biggest regret was not getting his diploma," said Litterer. "I knew right away that we had to make this happen."

Litterer traveled all the way to San Angelo from Iowa to help present Huisenga his official 1943 Auburn High School diploma.

A ceremony that was celebrated by Huisenga's family and friends.

An opportunity he never thought he would ever get.

"I always hoped that I would get a diploma," said Huisenga. "I couldn't be anymore pleased."