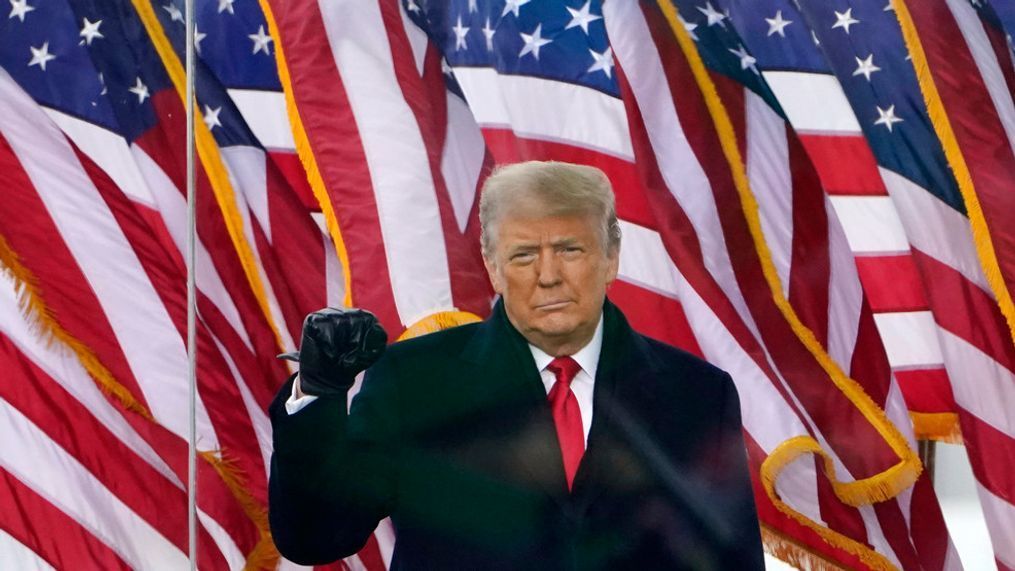 President Donald Trump gestures as he arrives to speak at a rally on Jan. 6, 2021, in Washington. (AP Photo/Jacquelyn Martin, File)

The company said in a blog post Wednesday it is adding “new guardrails” to ensure there are no “repeat offenders” who violate its rules.

In the event that Mr. Trump posts further violating content, the content will be removed and he will be suspended for between one month and two years, depending on the severity of the violation,” Meta, which is based in Menlo Park, California, said.

Facebook is not only the world's largest social media site, but had been a crucial source of fundraising revenue for Trump’s campaigns, which spent millions of dollars on the company's ads in 2016 and 2020. The move, which comes as Trump is ramping up his third run for the White House, will not only allow Trump to communicate directly with his 34 million followers — dramatically more than the 4.8 million who currently follow him on his own site, Truth Social — but will also allow him to resume direct fundraising.

Responding to the news, Trump blasted Facebook’s decision to suspend his account as he praised Truth Social.

“FACEBOOK, which has lost Billions of Dollars in value since “deplatforming” your favorite President, me, has just announced that they are reinstating my account. Such a thing should never again happen to a sitting President, or anybody else who is not deserving of retribution!” he wrote.

He was suspended on Jan. 7, a day after the deadly 2021 insurrection. Other social media companies also kicked him off their platforms, though he was recently reinstated on Twitter after Elon Musk took over the company. He has not tweeted.

Civil rights groups and others were quick to denounce Meta's move. Letting Trump back on Facebook sends a signal to other figures with large online audiences that they may break the rules without lasting consequences, said Heidi Beirich, founder of the Global Project Against Hate and Extremism and a member of a group called the Real Facebook Oversight Board that has criticized the platform’s efforts.

“I am not surprised but it is a disaster,” Beirich said of Meta’s decision. “Facebook created loopholes for Trump that he went right through. He incited an insurrection on Facebook. And now he’s back.”

NAACP President Derrick Johnson blasted the decision as “a prime example of putting profits above people’s safety" and a “grave mistake.”

It’s quite astonishing that one can spew hatred, fuel conspiracies, and incite a violent insurrection at our nation’s Capitol building, and Mark Zuckerberg still believes that is not enough to remove someone from his platforms,” he said.

But Jameel Jaffer, executive director of the Knight First Amendment Institute at Columbia University called the reinstatement “the right call — not because the former president has any right to be on the platform but because the public has an interest in hearing directly from candidates for political office.”

Clegg said that in light of his previous violations, Trump now faces heightened penalties for repeat offenses. Such penalties “will apply to other public figures whose accounts are reinstated from suspensions related to civil unrest under our updated protocol.”

If Trump — or anyone else — posts material that doesn't violate Facebook's rules but is otherwise harmful and could lead to events such as the Jan. 6 insurrection, Meta says it will not remove it but will limit its reach. This includes praising the QAnon conspiracy theory or trying to delegitimize an upcoming election.

Meta said Trump's accounts will be restored in the coming weeks on Facebook and on Instagram. Banned from mainstream social media, Trump has been relying on Truth Social, which he launched after being blocked from Twitter.

While Trump has insisted publicly that he has no intention of returning to Twitter, he has been discussing doing so in recent weeks, according to two people familiar with the plans who spoke on condition of anonymity to discuss private conversations.

Though it has been eclipsed culturally by newer rivals like TikTok, Facebook remains the world’s largest social media site and is an incredibly powerful political platform, particularly among older Americans, who are most likely to vote and give money to campaigns.