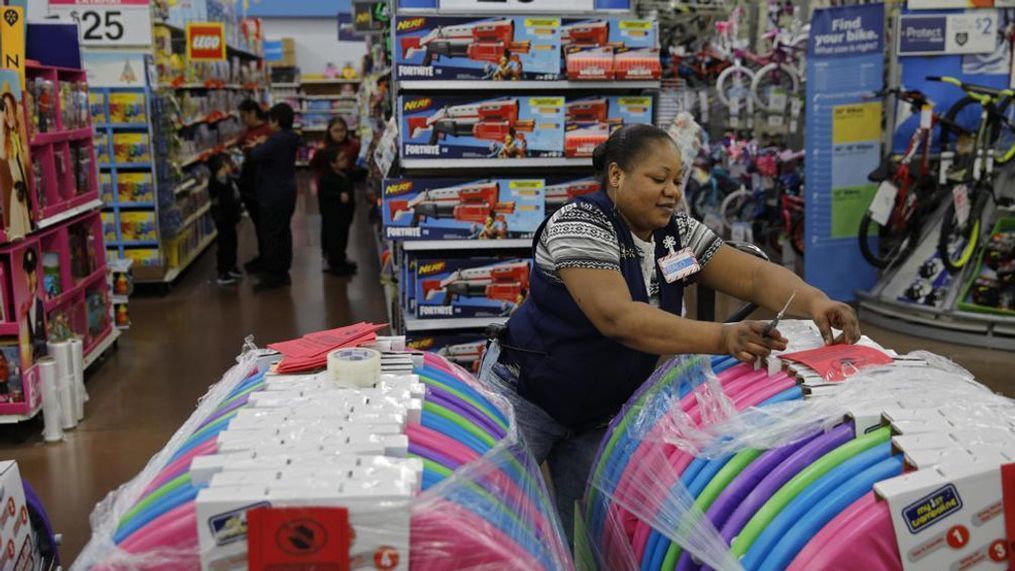 (TND) — Walmart is hiking its starting pay, a move that the company says will help around 340,000 workers in its stores.

Economists say this is a clear sign that the jobs market remains tight at the lower pay levels, and raising its minimum wage means Walmart needs help recruiting.

But this isn’t necessarily sunlight beaming through the storm clouds of a possible recession.

The economists said a discount retailer such as Walmart would fare much better than a lot of businesses if a recession hits.

A Walmart spokesman said the company’s starting pay range for entry-level roles is increasing to between $14 and $19 an hour, up from the current range of $12 to $18 an hour.

The higher pay kicks in this March and will bring average hourly wages at the retailer to around $17.50.

Walmart’s starting hourly pay goes as high as $32 an hour, depending on role and location, the spokesman said.

"We’re proud to continue investing in Walmart’s legacy by introducing new job opportunities and raising pay," Walmart U.S. President and CEO John Furner said in a memo to employees. "No matter where you are in your journey, getting your start here can open doors – the first step into jobs that become careers and build better lives."

“That's not insignificant,” he said of the more than 16% increase on the lowest end of the pay scale.

“Walmart carries extra big weight, because ... that's a lot of people that (the raise) affects,” he said.

But Weiler said this move by Walmart really has nothing to do with the recent downsizing at companies such as Amazon, Microsoft, Google or 3M.

“There are a lot of different labor markets,” he said.

Labor economist Aaron Sojourner said what’s happening in the technology sector is unique to that sector.

When capital was cheaper, and demand spiked during the pandemic, tech companies were in expansion mode.

But with demand for tech services down post-pandemic and capital costs higher from rising interest rates, the tech companies are trimming down and trying to make the most money they can off what they’ve already built.

“The tech layoffs were more a question of over-stuffing themselves during the pandemic,” Weiler said.

Sojourner said he’s worried about a possible recession, though he said the economy remains strong.

Weiler said he’s warming to the notion that we might actually avoid a recession.

But it’s not time to exhale just because Walmart, a really big company, wants to hire people.

“Walmart's niche in the market is kind of serving customers who are more value-conscious,” Sojourner said. “If anyone's going to thrive in terms of customer demand, if there is a recession, Walmart is maybe better positioned to profit from that.”

Despite the historically tight labor market, many workers haven’t been sharing in strong corporate profits, according to a report from the Brookings Institution.

Researchers took a look at the pay and profits at 22 big companies that together employ more than 7 million frontline workers.

Walmart was included in their analysis, as were companies such as Target, Amazon, CVS, UPS, Home Depot, Kroger, Starbucks, McDonald’s and Disney.

The full list of companies, along with their full report, can be found here. But the researchers found, “Overwhelmingly, financial gains benefitted wealthy shareholders and executives, while frontline workers experienced the greatest losses and benefited minimally from company success.”

The 22 companies’ shareholders grew $1.5 trillion richer, while their 7 million workers got $27 billion in additional pay, or less than 2% of shareholders’ gains, according to the report from Molly Kinder, Katie Bach and Laura Stateler.

They analyzed a nearly two-year period, ending with October 2021, and found the 22 companies spent five times more on dividends and stock buybacks than on all additional pay for workers.

Walmart's U.S. comp sales grew 8.2% in the most recently completed quarter of its current fiscal year.

Walmart’s decision to raise pay now – after the traditionally busy holiday period – is unusual and underscores the fact that Walmart seems to be seriously concerned about attracting workers, Weiler said.

He said turnover is expensive for companies but much higher in lower-wage industries and occupations.