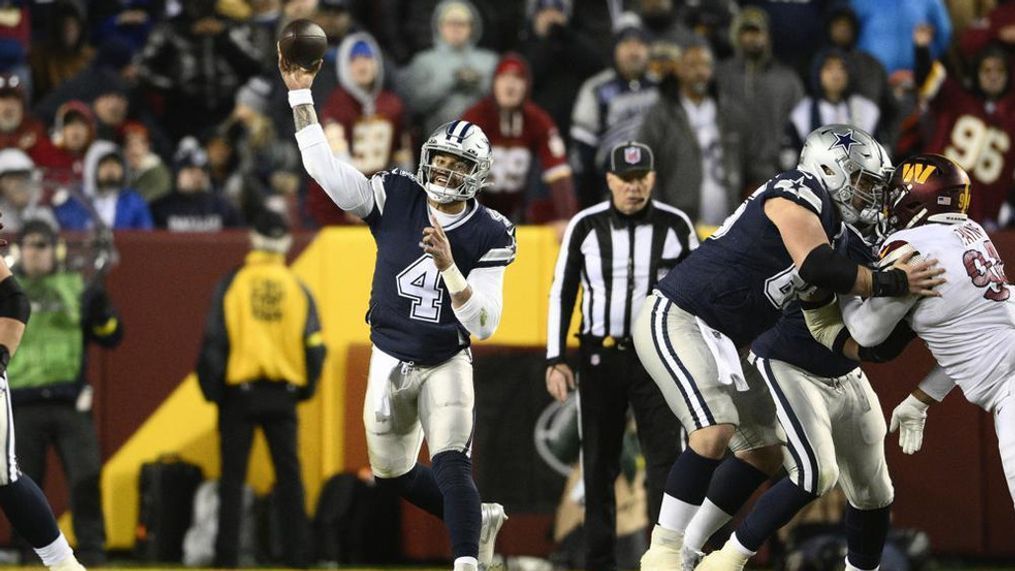 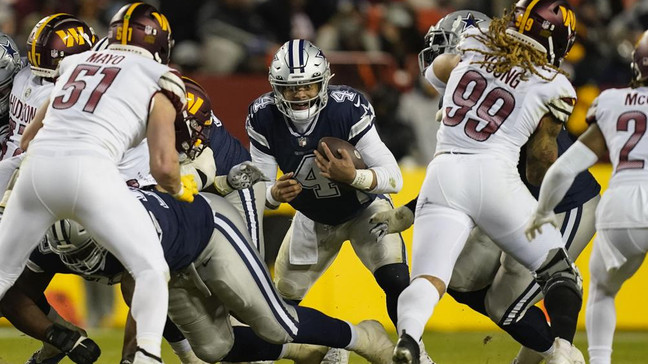 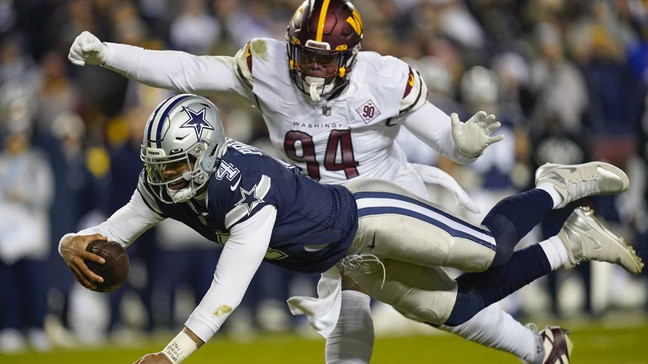 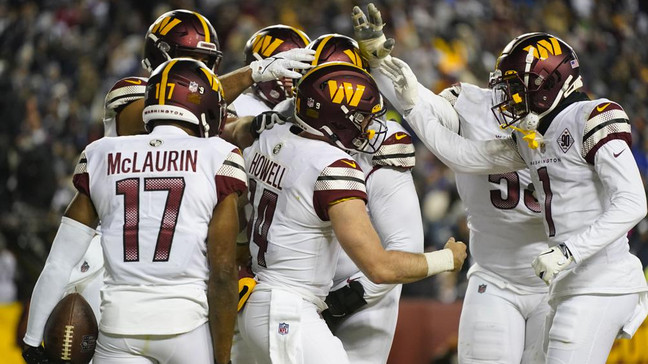 LANDOVER, Md. (AP) — Dak Prescott completed just 14 of his 37 passes for 128 yards, threw another interception that was returned for a touchdown and the Dallas Cowboys laid an egg in their final regular-season game, losing 26-6 to the Washington Commanders on Sunday.

Despite playing their starters with coach Mike McCarthy pledging they were playing to win, the Cowboys limped into the playoffs and a wild-card showdown at Tom Brady and the Tampa Bay Buccaneers next weekend with Prescott on a career-long seven-game interception streak.

Beyond getting picked off by Kendall Fuller on the pick-6, Prescott was wildly inaccurate and the Dallas offense had just 169 total yards before he was replaced by Cooper Rush in garbage time.

This was not exactly how the Cowboys (12-5) figured things would go with a chance, albeit small, to win the NFC East if Philadelphia lost at home to the also playoff-bound New York Giants, who were resting several regulars and starting a third-string quarterback.

While the Eagles took care of their business to lock up the division title and earn the conference’s top seed and a first-round bye, Dallas lost to Washington’s third QB to start a game the season: a rookie making his NFL debut.

Sam Howell threw a touchdown pass to Terry McLaurin among his 11 of 19 passing for 169 yards and ran for another among his 35 yards rushing. The fifth-round pick out of North Carolina became the first Washington rookie QB to throw and run for a TD in a game since Robert Griffin III in 2012.

Howell also connected on a 52-yard completion with McLaurin, who set a career high for receiving yards in a season. Eliminated from playoff contention last week after Carson Wentz threw three interceptions in a loss to Cleveland, the Commanders (8-8-1) ended a four-game winless stretch and avoided a third consecutive losing season in as many years with Ron Rivera coaching and in charge of football operations.

Tony Pollard returned after missing Dallas’ previous game against Tennessee with a thigh injury and rushed for 19 yards to surpass 1,000 for the season. Pollard finished the regular season as the Cowboys’ leading rusher, the first time anyone other than Ezekiel Elliott has had that distinction since the three-time Pro Bowl back was picked fourth in the 2016 draft.

The Commanders retired Hall of Fame quarterback Sonny Jurgensen’s No. 9 during a halftime ceremony, the fourth player in franchise history to get that honor. Jurgensen played the final 11 seasons of his 18-year career with Washington and went on to spend roughly another four decades on the team’s radio broadcast.

Cowboys: CB DaRon Bland left early in the fourth quarter with a chest injury. ... S Jayron Kearse walked off gingerly late in the third. ... LB Leighton Vander Esch was out with a neck injury and C Tyler Biadasz with an ankle injury.

Commanders: Go into another offseason looking for a starting quarterback.