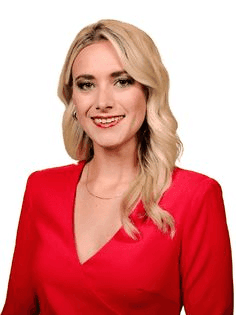 Kayla joined Sinclair in 2022 as a Capitol Hill-based national correspondent in Washington, D.C.

Prior to joining Sinclair, she spent the last four years anchoring and reporting for WAVY-TV in Norfolk, Virginia. While in Virginia, Kayla covered elections, hurricanes, court cases, and the military. In 2022, she won an Emmy for her coverage of the 20th anniversary of 9/11.

Prior to Virginia, Kayla worked as a reporter for WJHG in Panama City Beach, Florida, where she covered an array of issues including the important role the panhandle played in the 2016 presidential election. In 2016, Kayla received multiple Florida Associated Press awards including one for her breaking news for her coverage of Hurricane Irma.

In 2014, Kayla began her career at Fox News headquarters in New York City. She interned after college for Gretchen Carlson and then accepted a full-time position on the Fox Business show “The Independents” which turned into “Kennedy.” Kayla then went on to work as the personal assistant to Greg Gutfeld as he launched “The Greg Gutfeld Show” in 2015.

Kayla is a proud Florida Gator where she majored in Telecommunications-News. While at Florida she was a member of the University of Florida’s official dance team the “Dazzlers“ and performed at men’s and women’s basketball games as well as other university athletic events.

Kayla grew up in South Florida where she studied classical ballet with Cuban teachers in Miami and Fort Lauderdale. She speaks conversational Spanish and has a love of Cuban coffee. Kayla has two younger sisters and her parents still live in South Florida, which makes visits home always feel like a vacation in paradise.